A credit card swiper that plugs into an iPad’s charging slot and can be used to sell tickets and merchandise at event sites.

From a NYTimes article titled “In China, Human Costs Are Built Into an iPad”

“You can either manufacture in comfortable, worker-friendly factories, or you can reinvent the product every year, and make it better and faster and cheaper, which requires factories that seem harsh by American standards,” said a current Apple executive.

“And right now, customers care more about a new iPhone than working conditions in China.”

Photograph by Ryan Pyle for The New York Times

Aluminum dust from polishing iPads caused the blast at Foxconn’s plant in Chengdu.

The latest hot discussion on the internet is the author Larry Downes versus Best Buy.

To compete successfully against new online retailers, traditional retailers would also need to find ways to transform the expensive liabilities of physical locations with limited hours and high labor and inventory costs into assets that complemented rather than competed with the online experience.

There’s a great line from the column:  From Ernest Hemingway’s “The Sun Also Rises” novel, one character asks another how he went bankrupt.  “Two ways.  Gradually, then suddenly.”

Larry has a great summary of why Best Buy is dying slowly:

I’m not shilling for Amazon or any other successful online retailer here.  My point is much more basic.  Amazon neither invented nor appropriated its basic strategies from Best Buy or anyone else.  It simply does what consumers want.  Best Buy does what would be most convenient for the company for consumers to want but don’t, then crosses its fingers and prays.  That’s not a strategy–or not a winning strategy, in any case, now that retail consumers aren’t stuck with the store closest to home.

Analyst Tero Kuittinen said that T-Mobile “must now explore more creative opportunities — for instance, seeking partnerships with media giants like Amazon, Facebook or Google. T-Mobile’s spectrum, not its customer base, is its most valuable asset.”

A commenter on a forum noted:

T-Mobile is not “damaged” as AT&T claims… besides being four billion dollars richer, many T-Mobile customers were opposed to this deal, and are relieved that the company can once again focus on its customers.

If you are having an event and need to sell tickets, EventBrite might be the best way to go.

We used EventBrite to sell tickets to our North Country Film Festival in 2010. It was a success.

Now, the California-based company has released an iPad app that faciliates at-the-door sales. The NYTimes has an article:

To deal with similar situations, and to compete more directly with the big guns of the industry, in June the company introduced Eventbrite at the Door. Using an iPad app and a credit card scanner, Eventbrite at the Door customers can let in advance ticket holders and sell 400 new tickets per hour.

We are hoping that soon their new At the Door app can utilize the awesome Square card reader software available for Android and iOS. It does not appear possible yet… from Techcrunch:

Eventbrite is bundling the hardware and testing it in beta with about five or six event organizers, but it plans to release it as an iPad app this summer. The first iteration will be called Eventbrite at the Door, but as more features are added, such as seating, it will evolve into a full mobile box office. CEO Kevin Hartz sees it as akin to Opentable terminals at restaurants. Eventually he’d like to partner with Square for the card swipe readers, but is waiting for Square to open up its API. Square just launched its own iPad cash register app as well, but that is geared more at merchants than event organizers.

In the meanwhile, EventBrite charges less than TicketMaster:

The company charges consumers 2.5 percent of the cost of each ticket plus 99 cents, plus credit card charges of about 3 percent. For a $20 ticket, those fees would come to about $2.10, or 10.5 percent — much less than customers are used to paying through Ticketmaster, where surcharges are often 30 percent or higher.

“A lot of people in the music business don’t want ticketing democratized,” said Josh Baron, editor of the music magazine Relix and co-author of the book “Ticket Masters: The Rise of the Concert Industry and How the Public Got Scalped.” “It’s a business, and venues want money.” 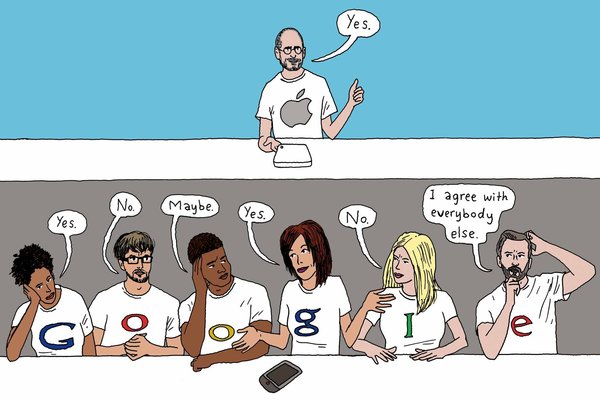 The Auteur vs. the Committee

From an article in digital domain at http://nyti.ms/qBBIB8

AT Apple, one is the magic number.

One person is the Decider for final design choices. Not focus groups. Not data crunchers. Not committee consensus-builders. The decisions reflect the sensibility of just one person: Steven P. Jobs, the C.E.O.

By contrast, Google has followed the conventional approach, with lots of people playing a role. That group prefers to rely on experimental data, not designers, to guide its decisions.

The contest is not even close. The company that has a single arbiter of taste has been producing superior products, showing that you don’t need multiple teams and dozens or hundreds or thousands of voices.

A well-known commentator, John Gruber, gave a talk a few years ago about design leadership and creative vision.

Two years ago, the technology blogger John Gruber presented a talk, “The Auteur Theory of Design,” at the Macworld Expo. Mr. Gruber suggested how filmmaking could be a helpful model in guiding creative collaboration in other realms, like software.

Just developing… read this great post from an IP lawyer/activist, Florian Mueller. To quote his article:

The Lodsys situation is getting out of control, and I think each affected app developer should now look for an exit strategy. In this blog post I describe the way I would go about. After an update on the Lodsys situation, I’ll outline the short version of my suggested course of action. Thereafter, I go into detail on its various parts.

And he links to the EFF’s site to a post in 2010 about Apple’s program:

UPDATED: All Your Apps Are Belong to Apple: The iPhone Developer Program License Agreement

Have you heard of Square yet? It’s the hot new mobile payments tool for smartphones/mobile devices. Visit squareup.com

From the NYTimes on Tuesday:

On Monday, Jack Dorsey, Square’s co-founder and chief executive, announced a way for shoppers to pay by simply giving their name to the merchant. Mr. Dorsey, who also co-founded Twitter, said customers would use a new feature on Square’s iPhone or Android apps, called Card Case, to make payments. Merchants would use one called Register to ring up and track purchases.

Point of Sale technology is ripe for change

Recent comments at the wired.com article.

Nick Houldsworth wrote: I work for a web based point of sale software start-up called Vend (www.vendhq.com). I think this is a fantastic development. We at Vend, alongside some other startups (Cashier Live, Erply) been working on disrupting this sector for a while now. Traditional POS is expensive, clunky, and requires outrageous maintenance and infrastructure costs. We’re pleased to welcome a large and well funded player such as Square, into this space. Their iPad app may not be for all retailers (lacking some of the finer control over inventory, barcode scanning, and integration into 3rd party apps such as ecommerce and accounting) but for a simple get up and go POS and payment system, and an innovative shake up to the industry, this can only be positive :)

I ordered a Square reader for Android. It will be great to sell items without using PayPal.

One major POS equipment maker is Verifone. As quoted in the NYTimes article… Good luck, Mr. Bergeron. I think your prediction of failure is wrong:

Initially, the company most in Square’s sights is Verifone, whose point-of-sale terminals and software are in 70 percent of businesses in the United States. In an interview before Square’s announcement, Doug Bergeron, Verifone’s chief executive, said that Square would not catch on for payments because people will prefer N.F.C. technology and have security concerns about using Square.

Insight into the world of iOS developers

CNET ran a story yesterday about BeamItDown Software, the start-up software developer who made the iFlow Reader app for iOS. They condemn Apple for a draconian policy.

And a full interview at CNET of BeamItDown’s co-founder Dennis Morin.

Nowhere in the history of application development has there been rules associated with it, let alone hundreds of rules like there are now. I mean, this extends their [Apple’s] control-freak nature to a whole new level. So yeah I can sell an app on my Web site, that’s fine. But if I have something for sale on my Web site, I have to have a button in the app that allows a user to purchase that item through Apple’s In-App Purchase system for the same price that I sell it at on my Web site.

Now if I’m selling a book for $10 and someone clicks on that button in the app, I lose $1.15 on the sale and Apple makes $3. Let’s face it, the user doesn’t give a s—. They’re going to purchase it from wherever’s easiest to purchase it.

To clarify the outrage these developers feel:

What people don’t understand is that if you’re selling an app on iOS, Apple hosts that app on their server. You upload it, the customer downloads it, it gets downloaded from their servers. OK. With In-App Purchase it doesn’t work that way. You host everything. You ship it directly to the customer. All Apple does in the process is collect the money and basically give you a token that says it was collected and you do everything else. It’s essentially doing exactly the same thing as a credit-card processing company for this 30 percent. Nothing more.

Paul’s brief definition of the profession of website architect:

A web architect masterminds the creation of a website’s strategy, information structure, technology, design and usability.

Paul’s motto has been:  A web architect sees the world through two lenses: information that needs structure, and structures that need form. It’s not enough for sites to function well; as I see it, they need to function beautifully.

A web architect will hire expert craftsmen such as programmers, designers, writers and marketers to help produce the final web product.

PDG has been fortunate to partner with many great experts in various fields, from programmers to advertising agencies to photographers.