Given our observations with this threat, we assess with high confidence that this list is incomplete and other devices could be affected.

WIRED has an article about this cybersecurity hazard here: https://www.wired.com/story/vpnfilter-router-malware-outbreak/

WIRED has reached out to Netgear, TP-Link, Linksys, MicroTik, and QNAP for comment on the VPNFilter malware. Netgear responded in a statement that users should update their routers’ firmware, change any passwords they’ve left as the default, and disable a “remote management” setting that hackers are known to abuse, steps it outlines in a security advisory about the VPNFilter malware. The other companies have yet to respond to WIRED’s request.

Maine has a three-part internet access problem that is affecting our collective economic prospects. Scarce rural access, slow internet speeds and expensive  data plans are causing us Mainers (and our companies) to not gain the full benefits of modern cloud-computing services and infrastructure—and we are actually overpaying for connectivity, relative to other cities in the USA and even across the world. (Sources.)

However, Maine is also one of the rare states with an advanced fiber-optic network, called the Three-Ring Binder, strung throughout its territory, connecting (some) rural areas to (some) population centers.

Learn more about its genesis (from both private and federal investment dollars) at Maine Fiber Company:

Maine Fiber Company owns and operates an extensive high-capacity dark fiber network in the northeastern US. The network is largely an open-access middle-mile infrastructure and is available to all carriers and service providers on a non-discriminatory basis. 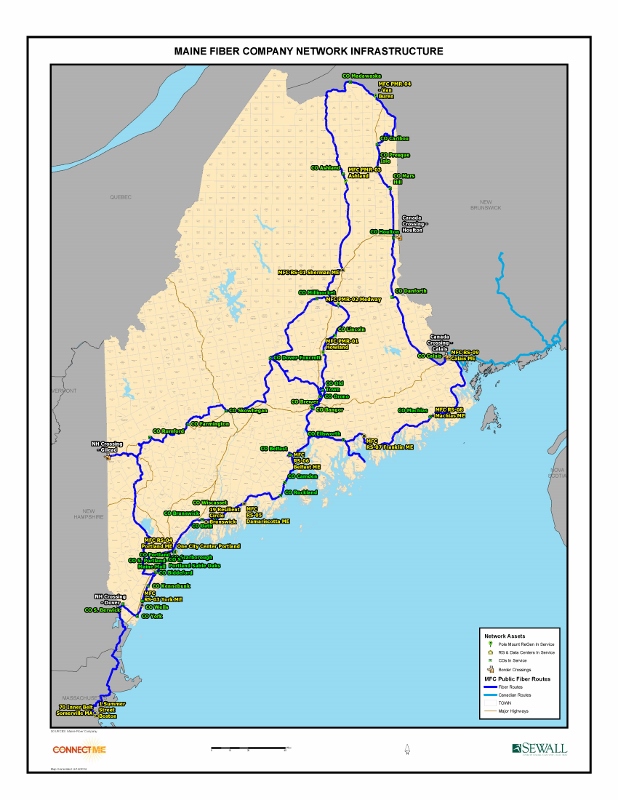 So that’s the good news; we have a solid foundation. But there are many barriers to broadband expansion and competition in Maine, including geographical barriers (rural sparsely-populated areas) that discourage commercial profit-driven development, and also opposition from  incumbent telecom companies who strive to make pole attachment difficult and lobby (and litigate) against community-owned networks.

Where market forces have failed to provide choice, quality of service, and modern speeds, a feasible solution is for communities to build their own networks, as Rockport did (see news story). Maine, with its Three-Ring Binder network, has the necessary “dark fiber” to allow communities and local service providers to connect and offer very fast speeds at lower prices than the incumbents.

Check these informative resources to learn more about the national movement for community-owned broadband.

A VISION FOR MAINE

As a software company owner and resident, my vision for Maine in the 21st century is for us to become a State with the highest percentage of its population connected via Gigabit Fiber networks —to each other, and to the world.

Why “Gigabit”? It’s all about the speed of getting things done.

Many professional services will benefit from faster downloads and uploads, including:

We especially need improvements to our upload speeds, where the lopsided difference is indefensible by existing providers (it’s about economics, not physics).

Quick quiz: do you know why your office downloads are (somewhat) fast, but upload speeds are slow, at around 5Mb or 10Mb? Short answer: internet providers built out their networks as if the internet was passive TV; we can consume data but we can’t easily “broadcast” or publish anything ourselves.

21st Century states need Gigabit speed, which is 1,000 Mbps. To compare: currently most of us with Cable internet access in Maine have a top speed of 50Mb for downloads / 5Mb for uploads. (Note again the huge disparity between upload and download speed.)

To understand how measurements are made, learn this simple rule:  “Bytes are for storage, bits are for data”  and the ratio of:  1 Byte = 8 bits.

So this means you could describe speeds or file sizes interchangeably, by converting “bits-to-bytes” but it’s best to stick with the B (storage)or b (data) as appropriate.

Here’s a chart with common examples of file sizes versus the data transfer speeds it would take to download: 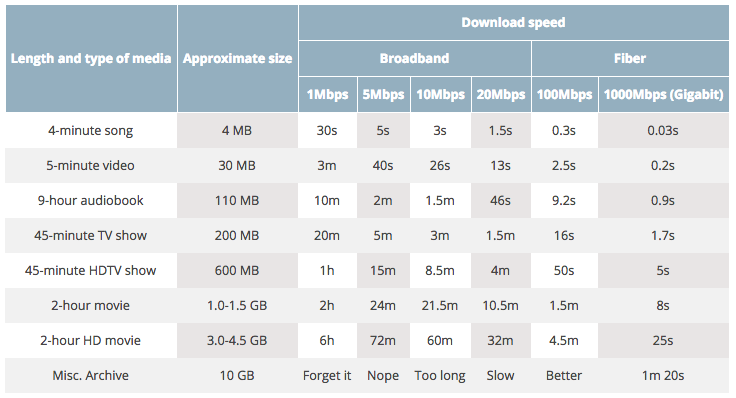 Let’s study a particular use case: online (cloud) backups, for personal or corporate archiving. Let’s say you have a small 500gb hard drive that needs continuous, offsite backups… here’s how long it would take to do the initial upload to a cloud backup service over 3 different upload speeds. 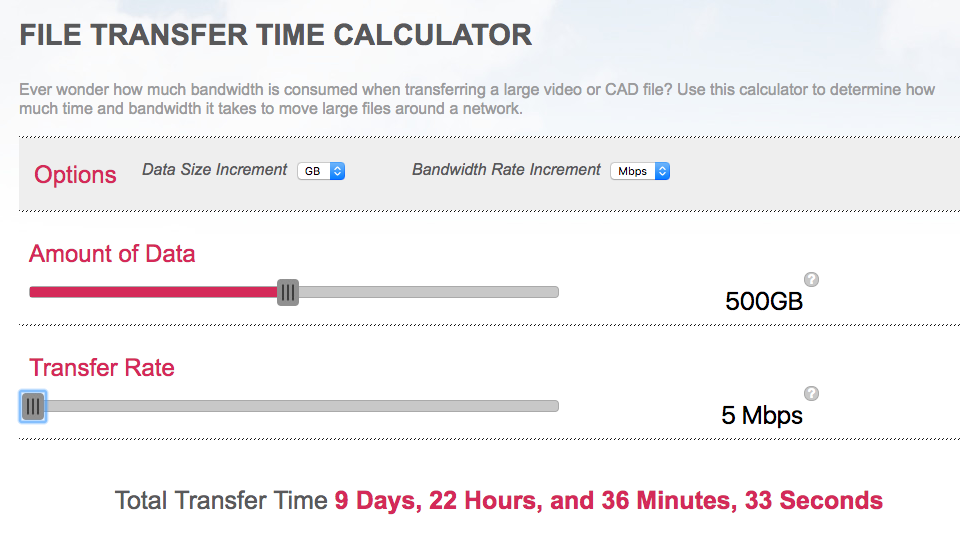 That’s over 9 days to do a first-time sync. Ever completing that transfer is highly unrealistic, especially if its with a laptop that you need to take from office to home and back, interrupting the progress. 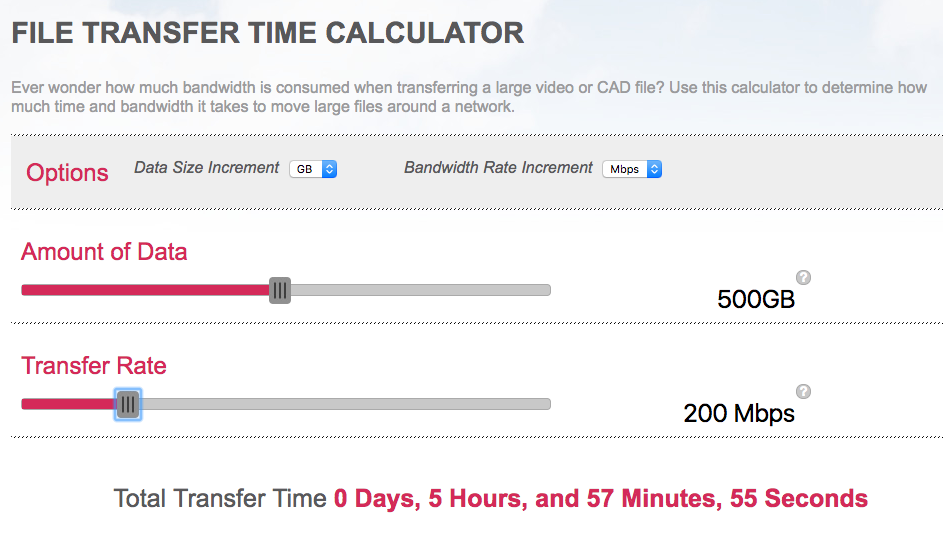 A 5 hour transfer time is much more reasonable; set it in motion before bed and by the morning it will be complete. 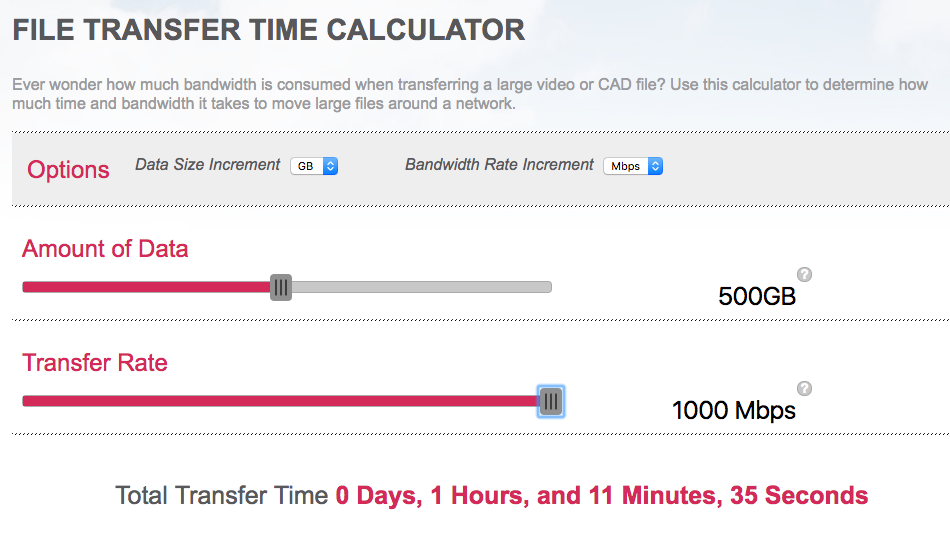 Just think of how productive we could be with video uploading and sharing projects (like uploading your marketing videos to Youtube); with transferring gigabyte datasets across corporate locations; streaming Virtual Reality data in real-time; and many more business activities—and I am purposefully not mentioning the benefits to all the myriad entertainment services available, since such “non-critical” uses (download 40 music files per hour! watch 5 different movies at home!) can be used to detract from the urgent necessity of better speeds for actual business or professional applications.

WE CAN DO BETTER

From the linked Akamai report, and according to PCMag:

…better government planning in South Korea has improved internet connection speeds across the country dramatically. Additionally, a competitive Korean ISP market has led to exceptional service levels for end users. In the city of Cheongju, average internet speeds to citizens of 124.5Mbps are standard. Further, 1Gbps internet plans are available in South Korea for just $20 USD.

My office currently pays $75/mo for a 30Mb/5Mb plan. Here’s what a widely-used speed test shows I am getting at this moment: 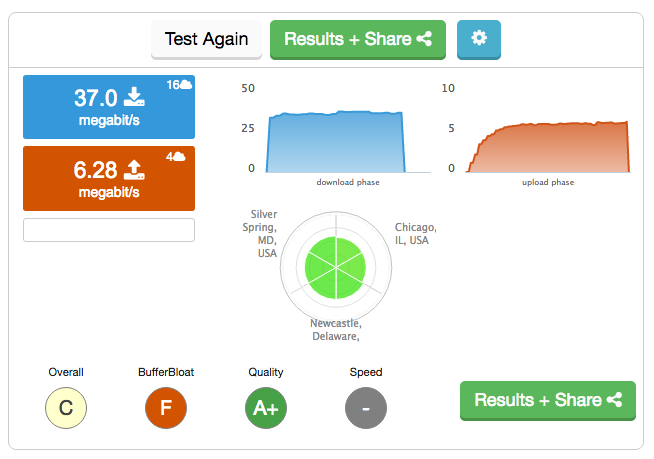 This is a shared cable network, so when other users nearby are using the internet, speeds will slow. But 6Mb upload is not acceptable in today’s world, and according to Maine’s standards. What can be done?

A CALL TO ACTION

So let’s join together to create better connectivity options in our state! Here’s how, specifically:

Question for you: do you favor a less personal connection with the support reps you need to interact with in our modern life, or a more personal, face-to-face experience?

Spending Too Long On Hold – Spending time on hold is a major source of frustration for consumers. 38 percent of respondents have spent 10-30 minutes on the phone with a customer support representative, while over half (56 percent) actually said that they’ve waited an hour or more to have their problem solved.

The company that commissioned the study makes SMS messaging platforms. It was acquired by Salesforce in Sept. 2016

Sometimes you might be in the mood to chat with a live person, with all the empathetic channels of voice in force, and other times you may prefer the single-channel avenue of ascii text. Let the customer decide which channel they prefer!

Ars Technica had an article about Jeff Bezos’ motivations for space rocketry and travel:

Bezos dismissed this approach on Oct. 22, during the Pathfinder Awards at the Seattle Museum of Flight. In remarks first shared by GeekWire, Bezos said Earth should be zoned as a residential area. “I don’t like the Plan B idea that we want to go into space so we have a backup planet,” he said, noting NASA’s efforts to send probes throughout the solar system. “Believe me, this is the best planet. There is no doubt this is the one you want to protect. This is the jewel. We evolved here, we’re kind of made for this planet. It’s gorgeous, and we can use space to protect it.”

Humanity has two futures, Bezos said. It can continue to grow, or it can settle into some kind of population equilibrium. As an example of the planet’s limitations he offered energy as an example. Taking the baseline energy use on Earth, and compounding it at 3 percent for 500 years, would require covering the entire surface of the Earth in solar cells to meet the demand by the year 2500.

Perhaps a better way for a “tech neophyte” to try out coding is to learn how to write HTML/CSS. This pairing is far more self-contained and visual, and gratifying, than programming initially is (no matter the flavor, whether JS, Python, Swift, they all are far more complex with abstract logic).

Learning how to create a static web page only requires a layout, a text editor and a browser. You can try your hand at building a magazine page, for example, with its masthead, article areas and footer—and you will not be dealing with math or abstract problem solving that coding soon requires.

The learner can see how the basic HTML language syntax works (e.g. simple tags go around the words to style or structure them)… experience how the browser is strict about typos (early experience in debugging!); see how dependencies are linked in (graphics, external hyperlinks); see how the classes and IDs from the CSS file influence the HTML elements; and so on.

If the somewhat tedium of composing blocks of HTML and CSS code is gratifying to the learner, and it sparks an interest, then they can continue gaining fluency in the constructs and begin to appreciate how WYSIWYG editors work (like in WordPress or BigCommerce, say). This can be so helpful for business owners or bloggers, to fix the mistakes that RTEs can introduce from copy/paste actions from other sources (ie. Word pastes).

So, I’m proposing that fluency in HTML is a more basic, essential skill for today’s professionals than actual coding.

If an investor tells you that you can’t build a real business on $20/month, direct them to Constant Contact.

Their average selling price is $37/month, they have 375k customers, they are on target to do $170 million+ in revenue this year, and they are a publicly traded company (AKA liquidity event).

SAAS (Software as a Service) startups need to focus on getting on past what Gail calls the slow ramp of death. When selling low-priced subscriptions you make your money in subsequent years — not up front.

The slow ramp of death is even harder to get past at an average selling price of $37/month; 1000 customers at that price brings in enough revenue to pay a small handful of employees.

From an excellent Ars Technica article:  Choosing between MySQL and NoSQL.

“For 30 years in the IT industry, we’ve had traditional development models,” Gnau said. “We grab users, put them in a room, get their requirements, build out the design, look for data to find structures and reporting, implement and hand it back to users. It was a traditional waterfall approach. Even agile development starts with requirements and winds up with results.

“In Hadoop, you need to challenge that and turn it around. Data is not structured. Users may not know what the requirements are. It’s an inverse process—you land the data, find data scientists to find relationships that are interesting and appealing, and turn that into requirements that yield a system. It’s the opposite approach to a traditional process.”

to verify if any website is still vulnerable to the bug. (Remember, not all websites used the same OpenSSL protocol.)

On April 8 I was notified by WiredTree, our hosting company, that their servers had been patched against a newly discovered (and serious) flaw in the SSL encryption technology which underpins secure browsing over https.

It is called the Heartbleed bug.

Our servers were not affected, as they ran CentOS5 and did not use Litespeed. Other sites which did use LiteSpeed were affected.

An article on Thursday explains how the bug crept in the Open Source software.

Heartbleed, a “catastrophic” security flaw in the OpenSSL cryptographic protocol that has affected two-thirds of the entire Internet’s communications, was committed at 10:59 pm on New Year’s Eve by Seggelmann, a 31-year-old Münster, Germany-based programmer.

That night, he made an error that has been compared to the misspelling of Mississippi, a careless but almost inevitable mistake that went undetected for over two years.